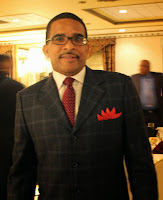 The Chester Clippers (2-5) continued their downward slide after suffering a 55-51 setback at the hands of the Downingtown West Whippets (10-1). Chester started the contest with a trey from senior Stanley Davis but the Whippets responded with an 8-0 run forcing the Clippers to call for a timeout at the 4:41 mark; Chester - 3, D'town West - 8. Coming out the timeout Chester showed signs of life with a 10-4 run to take the lead at 13-12. The Whippets scored on the next four points on a free throw and a trey to end the quarter. Chester - 13, Downingtown West - 16. Davis scored 9 of his team high 19 points in that opening stanza. Chester worked the ball around in the second quarter with five players in the scoring column. The Whippets however continued to knock down shots and was 30-22 with less than 30 seconds remaining in the quarter. On Chester next possession they worked the ball putting it in the hands of Jamar Sudan who scored and was fouled making the score 30-24. His missed free throw was rebounded and layed in by Maurice Henry, score 30-26. Stanley Davis pressured and stole the inbounds pass for a layup at the buzzer making the score Chester - 28, D'town West - 30. The team played even in the 3rd quarter each scoring 10 points with Davis leading the way for Chester with 6 more points; Chester - 38, D'town West - 40. After tying the contest at 46 with 3:46 remaining, the Clippers got careless with the ball and was unable to score on the next four possessions and found themselves trailing 46-52 at the 2:02 mark. Out of the timeout, Marquis Collins scored to bring his team to within 4 at 48-52. After another Clippers turnover and a missed layup, the Whippets were again up by six, 48-54 before Collins knocked down a trey with 0:02.9 seconds and a score of 51-54. The Whippets hit 1 of 2 free throws for the final score.

Jahmi Bailey-Green came in off the bench to score 6 points as fellow reserves Jordan Camper (3) and Dymon Colbert added 2 points. Khaleeq Campbell added 5 assists, 4 steals and 3 rebounds to go along with his 6 points. Marquis Collins finished with 7 points with Sudan and Henry each contributing 4 points to complete the scoring for Chester.

The Clippers will start the New Year by returning to the Clip Joint on Saturday, January 2nd when they play host to Philadelphia's Public League foe Bartram. The JV tips off at 6:00w with the Varsity game to follow.  Also on that night Chester will honor their only McDonald's All-American, Rondae Hollis-Jefferson, with the retirement ceremony of his jersey #23.

Chester (2-4) lets another one slip through their hands as they lose for the fourth time this season 67-54 to the Imhotep Panthers (7-2). Senior Khaleeq Campbell and junior Jamar Sudan led the way in the opening period with 6 points apiece and senior Marquis Collins added 5 as the Clippers held a 19-16 lead after the 1st quarter. Chester allows scoring opportunities to slip through their hands with unforced turnovers in the second period and the Panthers took advantage by running out to a 35-29 lead at the intermission. The Clippers offensive slump continued in the third as they were only able to muster 9 points and Imhotep stretched their lead to 10 points, 48-38 at the end of the period. The Clippers continued to fight in the final period led by Sudan with 6 more of his team high 15 points, Campbell drained his fourth trey of the night enroute to his 13 points and reserve Dymon Colbert came off the bench to score 4 points. Marquis Collins knocked down his second trey of the night for his 8th points but it was now enough to close the gap and the Clippers were once again on the short end of the score.

Chester will return to action on Wednesday evening for a 7:00 tipoff against Downingtown West as the Pete/Jameer Nelson Holiday Classic continues on the campus of Widener University.
Posted by Ms. B at 11:07 AM No comments:

The Clippers record now stands at 2-3 after they fall to the host Reading Red Knights 57-69 on Thursday evening, December 23rd. The standing room only crowd witnessed an exciting ball game as both team got up and down the floor in the first quarter. Junior Jamar Sudan scored both inside and outside with 7 of his team high 14 points in the first quarter including opening the contest with a trey. Starting in his first contest fellow junior Jordan Camper contributed his only 4 points of the contest in the first but it was not enough to offset the 20 scored by the Red Knights. Chester - 15, Reading - 20. In the second quarter senior Marquis Collins got busy scoring 7 of his 13 points, junior Ahrod Carter added 4 of his 9 and junior Larry Yarbray Jr. knocked down a trey as the team played even at 14. Halftime: Chester - 29, Reading - 34. Chester put together a solid 3rd quarter both on offense and defense and the Clippers found themselves ahead 50-48 at the end of the third quarter by outscoring their opponents 21-14. The wind was gone from their sails in the final period when they scored a mere 7 points while the Red Knights were connecting on 12 of 15 foul shots and pulled away for the win.

Video by Let the Music Play

A look at 2015 through blog photos
Happy Holidays!

The return to the Clip Joint was just what the Clippers needed as they evened their record at 2-2 with a 63-52 victory over the visiting William Penn York Bearcats (4-3) on Saturday evening. The week layoff was evident early in the opening quarter as the Clippers fell behind 5-11. The Clippers got some wind under their sails and outscored the Bearcats 12-5 to tie the game at 17 at the end of the period. Chester used a balanced attack with five players in the scoring column with senior Stanley Davis leading the way with 5 of his 9 points. Chester continued their defensive pressure into the 2nd quarter limiting York to 10 points to take a 30-27 lead into the intermission. Seniors Marquis Collins and Jahmi Bailey-Green led the way with 6 and 4 points respectively in the 2nd quarter. Junior Ahrod Carter got hot off the bench in the 3rd quarter draining 8 of his 14 points including two treys and junior forward Jamar Sudan contributed 4 points in the paint as the Clippers pushed their margin to 7 points at the end of the 3rd. Chester - 44, York - 37. The Clippers began to look for Collins in the final period and he came through with 7 of his team high 15 points as Chester captured another win at home.

Collins finished the contest with a double-double as he hauled in 10 rebounds to go along with his 15 points. He also contributed 3 assists and 2 blocked shots. Khaleeq Campbell added 8 points, Jumar and Jahmi finished with 7 and 6 points respectively. Junior Jordan Camper added 4 points and 6 rebounds to the stat sheet.

Chester will face their 3rd consecutive District 3 opponent on Wednesday, December 23, 2015 when they travel to take on the Reading Red Knights in the Geigle Complex at Reading H.S.
Posted by Ms. B at 1:14 AM No comments:

Champs and The Mission students went down to show their support for the seniors at the Chester Community center by interacting, and serving food along with giving gifts out to the seniors. 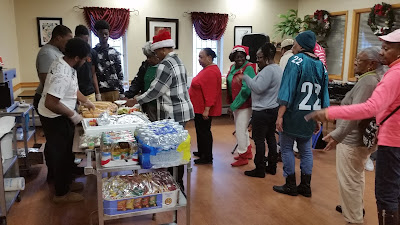 The audience was taken back how kind and polite the young men were. A woman came up and said she was so proud to see our young men doing great things like giving back and if it was anything she can do to help definitely give her a call. 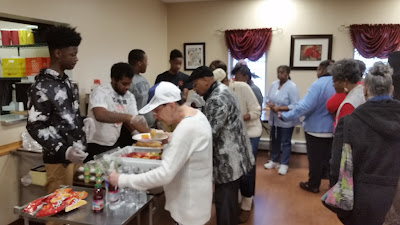