Fare & Square, the nonprofit grocery store, has partnered with the Food Trust to offer Fare & Square members free Healthy Shopping Tours aimed at teaching shoppers how to cook healthier meals on a budget.  The tours will be held every Tuesday in July, beginning on July 1st to help promote healthier meal choices.

A nutritionist from The Food Trust will give the tour and provide tips on eating healthier and making more nutritious recipes from 2:00 to 3:00 p.m. every Tuesday in the month of July.  Participants will learn how to:

Members that participate in the tour will receive a Fare & Square coupon as an incentive to purchase healthier ingredients to prepare more nutritious and affordable meals at home. For more information please visit http://fareandsquare.org/ or call 484-483-2500.

The west side of Chester was a food desert until Philabundance opened Fare & square on September 28, 2013.   There are more than 34,000 residents in Chester and more than half earn less than 200% of the poverty level according to the American Community Survey, 2008-2010 estimates.   People living below the poverty line generally don't consume the recommended amounts of fruits and vegetables each day.  Many of these adults are also overweight or obese and many suffer from other diet-related diseases, such as diabetes and heart disease. 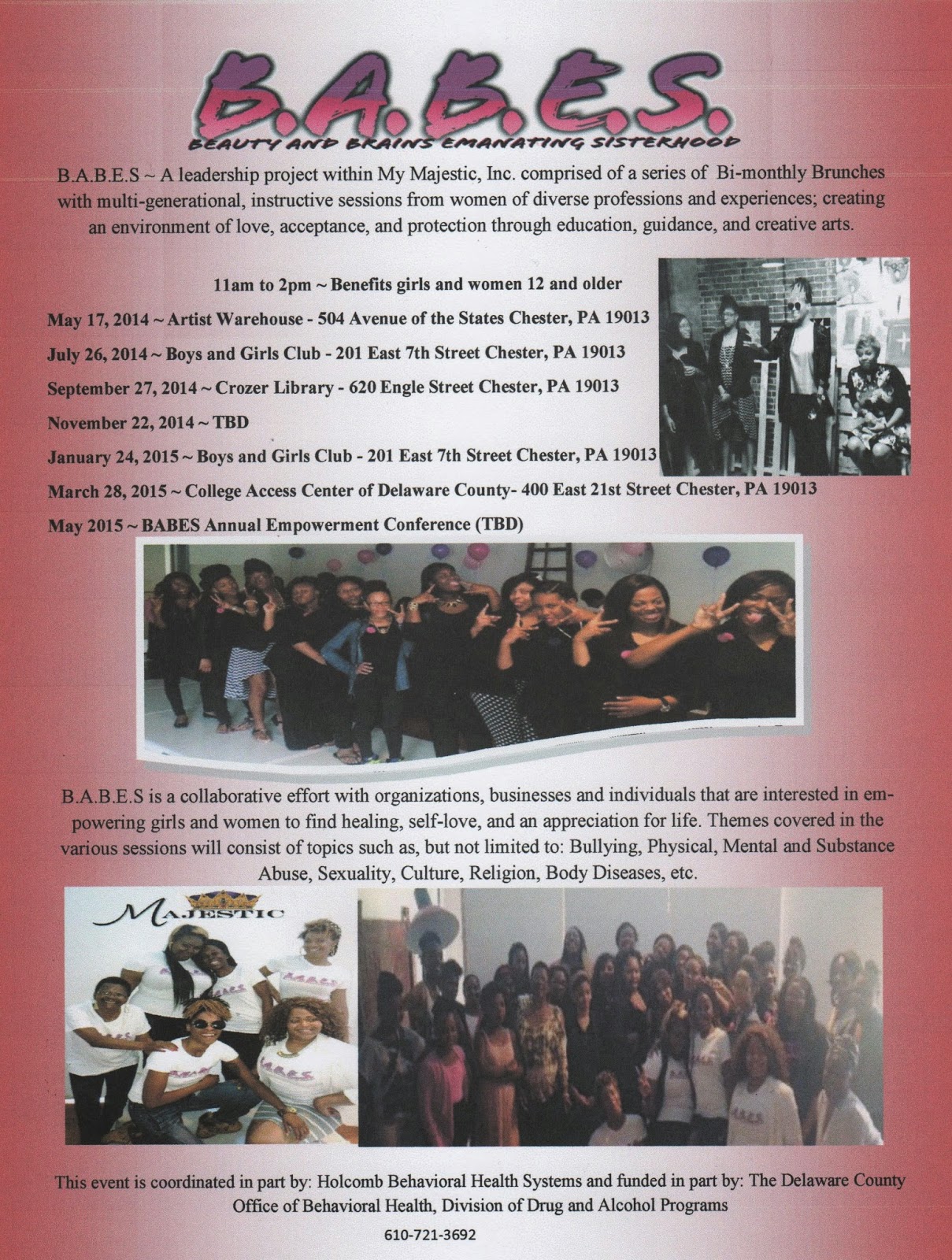 Now that school is out, I am back in school. I have gone back to Widener to finish up a few coursework for my degree. My first class back was School Architecture; Planning, Design, Construction, and Maintenance, a lot of work but a great class with Dr. Rentschler. Shout out to the Lancaster Cohort a great group of people to work with. Lancaster has beautiful countryside and the best cherries from Cherry Hill Orchards. We toured two of Lancaster’s brand new grand school facilities which are awesome in design. I learned a lot. Now I am off to the next course. Sorry but my postings will be slim. I will still post if you send in your events.

Email ThisBlogThis!Share to TwitterShare to FacebookShare to Pinterest
Labels: School is out

Play Hoops and Learn about Asthma 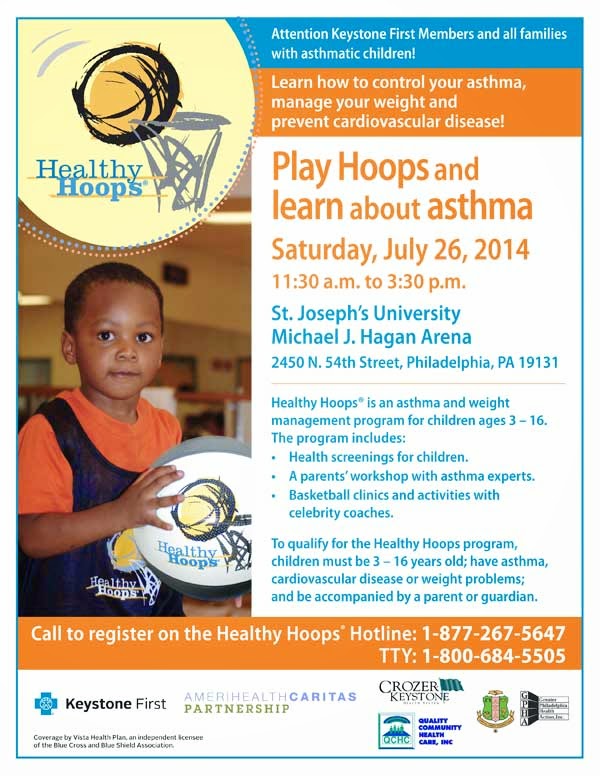 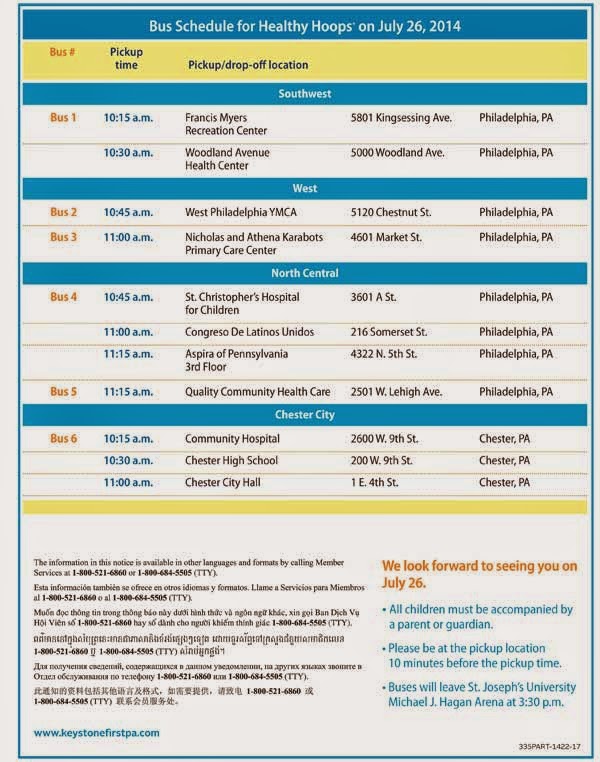 Email ThisBlogThis!Share to TwitterShare to FacebookShare to Pinterest
Labels: Play Hoops and Learn about Asthma


CHESTER, Pa.– Dr. Sarah Roth, associate professor and chair of history at Widener University, has published “Gender and Race in Antebellum Popular Culture” with Cambridge University Press. In the book, Roth examines how white women played a critical role in shifting how African American men were perceived in the decades leading to the Civil War through their contributions to popular culture media.

Roth examines a range of literature from antebellum America, including some obscure selections, to show that as the reading and writing of popular narratives emerged as largely feminine enterprises, a radical reshaping of black masculinity in American culture occurred. She shows that narratives created by white female authors often made white women appear superior to male slaves, leading to the demasculinization of black men and consequently impacting the political landscape of antebellum and Civil War-era America.

“I began this book because I was looking for a way to understand how ordinary white people in the 19th Century thought about race,” Roth said. “There were studies focusing on the theories intellectuals had about race, and a lot had been written on both the abolitionist movement and on political arguments in favor of slavery. But I wanted to know how middle-class people not directly involved in either the slave system or in antislavery efforts viewed African Americans in the decades leading up to the Civil War.”

Roth explains that when scholars have written about race, middle-class whites, particularly white northern women, have been left out of historical literature with the exception of the tiny minority who were active in the abolitionist cause. However, middle-class northerners were the people who in the 1860s would either go off to fight and die for the Union themselves or would stand by as their husbands, fathers, sons and brothers did so. Therefore, to understand what the Civil War meant to this middle-class white majority within northern society, Roth found it important to understand the evolution of their racial views in the decades preceding the war.

In “Gender and Race in Antebellum Popular Culture,” Roth uses short stories and novels to uncover those racial attitudes. “This seemed an effective means of getting at popular perceptions about race, since the reading of fiction expanded monumentally among the middle class during the antebellum period, and much of the most widely read fiction dealt explicitly with race and slavery,” she said.

Roth sees the audience for her book as students, academics and members of the general public who have an interest in the history of race in America, the causes of the Civil War and the impact white women had on both.

“Gender and Race in Antebellum Popular Culture” is available through Amazon beginning in July 2014. Roth earned her bachelor’s in history from Southwestern University and her master’s and doctorate in American history from the University of Virginia. In addition to her role at Widener as associate professor and chair of history, she also serves as coordinator for the university’s African and African American Studies Program. She is a resident of Wallingford, Pa.

Background
On Thursday, Aug 15, 2013, Daniel Boone Jr. of Chester, PA. (Age 77) between 5-6pm EST. was struck and seriously injured while riding his bicycle after visiting with his mother (then age 94). Dad was riding in the bike lane westbound at 9th & Carla's in Chester, PA, (dad was not wearing a helmet). The driver fled from the accident, and witnesses came forward. Dad was transported to Crozer Medical Center.

Dad sustained a fractured skull, pelvis, collar bone, and multiple damages to his brain. He would lay in a medically induced coma for 9 days.

Thank you all for your thoughtfulness, compassion, and prayers, after 8 months of trials, miracles, and recovery, dad is getting stronger every day. The first week of April 2014, dad was discharged from the caring hands of the staff at Brinton Manor Rehab Center, and continuing his recovery in the Northwest with Deborah and I. His rehabilitation through the Grace of God has included strengthening his speech, and learning to walk, eat,
neurological bodily functions, and reasoning development. Family, and close friends that have walked with him through this amazing experience "rejoice in the name of the Lord", fore we are steadfast for dad's full recovery! God has brought our father, son, brother, uncle, grandfather, friend, neighbor "a mighty long way, in a very short time".

Route will proceed west on 9th to Highland Ave.