After appearing at the State of the Union last week, Chester teacher Sara Ferguson continues to make appearances to discuss the plight of the Chester Upland School District and to represent teachers who continued to work without pay. Sara Ferguson will now appear on the Ellen Show on Thursday, February 2, 2012, check your local TV listings for channel and time.
First Lady Michelle Obama will also appear on the Ellen Show to talk about her campaign to end childhood obesity, her impact on the world of fashion, and her new Twitter account.
To read more about these appearances Click Here
Posted by Ms. B at 6:47 PM 2 comments:

From Dr. David Clark, CEO, CCCS
January 30, 2012
We are, of course, disappointed by today's ruling by the Commonwealth Court. Although it does not reach the merits of the case, the Court’s decision not to order immediate payment to Chester Community Charter School (CCCS) of approximately $7 million that is overdue, a deficit that will soon be $10 million on February 5 and over $13 million on March 5 without Court intervention, imperils CCCS and its students.
The implication of the ruling is that the charter school – and its three thousand Chester students – should suffer the negative effects of program reductions and layoffs in order to establish credibility for our reasonable efforts to obtain the funding required to continue to provide high quality education to the children of the City of Chester.
CCCS is the entity in Chester that built nine de novo school facilities on two campuses, managed its own budgets professionally and effectively, and whose students achieved AYP for three consecutive years. No doubt that is why parents in the city of Chester have gained such confidence in the school’s quality that CCCS now educates 60 percent of all K-8 grade students, in the city.
Unfortunately the ruling seems to imply that CCCS should discontinue all that has been done to provide these, and other, very favorable outcomes, and that our students are no longer deserving of a fully functioning educational experience, simply because the Chester Upland School District has not been able to handle its own fiscal affairs.
As an example, despite submitting a budget in June of $96 million for the 2011-2012 fiscal year, the District made no material changes to its operations and thus knew that it would be over-budget by tens of millions of dollars. Incredibly, according to the Inquirer, the District is on pace to overspend its budget by $27 million, a 28% increase from the budget it passed just seven months ago. Last year, CUSD’s budget was $113 million, so the District has outspent even last year’s budget when it knew full well that there would be a decrease in funding. Put simply, the District’s 2011-12 budget was a sham. All of this is occurring with charter schools like CCCS (and Widener) receiving less funding per student than the District.
In the midst of all this, the Secretary of Education has been acting as the Receiver for the District for approximately the last six years and has had representatives working in the District on an ongoing basis. Nevertheless, the State and the District have continued to run the District into the ground, and unfortunately CCCS is now endangered by the Secretary’s and the District’s fiscal irresponsibility.
In summary, CCCS takes significant issue with a ruling that suggests that the only way that CCCS can be entitled to receive funding for its students is to substantially reduce the overall effectiveness and quality of our school. Our attorneys will certainly contest this ruling.
Posted by Ms. B at 6:11 PM No comments:

Chester, PA, January 27, 2012– Representatives of the Chester Community Charter School and Chester Upland School District today announced that they have identified approximately $28.5 million of available, previously budgeted State funds, and previously approved State loan proceeds, that could conceivably be provided to the Chester schools to ensure funding for both, throughout the balance of the school year ending in June 2012.
In recent weeks, there has been a great deal of speculation about whether the public school or the charter school would be adequately funded to avert financial distress and, even, closure, in coming months.
Participating in the announcement were three senior officials from each of the entities. From Chester Upland School District there were Dr. Tony Watson, acting superintendent; Thomas Persing, acting deputy superintendent and Robert Burchak, chief financial officer.
Chester Community Charter School’s participants included: Hon. Spencer B. Seaton, chairman of the CCCS Board; Dr. David Clark, CEO; and Dr. Linda Portlock, deputy superintendent.
As was explained by Dr. Clark and Dr. Persing, the two entities have worked together to identify the following potential sources of funds:
These funding streams, once approved by the Corbett administration, could be made immediately available to the CUSD and CCCS, providing sufficient funds to both, to support the children’s education through the balance of the school year.
Commenting on the potential resolution of the longstanding crisis, Dr. Persing said, “With the Governor’s approval, this package of funds would allow the teachers and administrators at both institutions to return to the task of delivering quality education to the 7,000 students in Chester's schools, without the imminent threat of school closures."
“This joint announcement sends an important message that the city of Chester, together with its parents and educators, is united in wanting to ensure what is best for the children’s futures," said Dr. Clark. “This joint proposal is especially appropriate when we realize that nearly 40 percent of Chester Community Charter School parents also have at least one other child that attends a traditional CUSD public school. It’s the community’s wish that both entities be appropriately funded and that they provide strong educational services to these children.”
“We trust,” Clark concluded, “that PDE and our elected officials in Harrisburg appreciate how important this plan is for the entire community and that they work together to ensure that it is approved.”
Posted by Ms. B at 7:31 PM No comments: 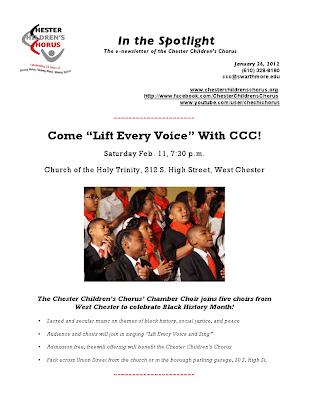 
Sacred and secular music on themes of black history, social justice, and peace


Park across Union Street from the church or in the borough parking garage, 20 S. High St.

Chester, PA — January 26 — The J. Lewis Crozer Library in Chester invites you to join us in celebrating African American history, culture, and achievement during Black History Month this February. Please register for all programs by calling (610) 494-3454.

Harriet Tubman kicks off Black History Month at the J. Lewis Crozer Library with her visit on Saturday, February 4th from 11:00a.m. to 12:30p.m. Families and African American history enthusiasts of all ages are invited to see renowned local actress and writer Dr. Daisy Century bring the heroic Harriet Tubman to life right in the library!

Marvel at the artistry and skill of African hair braiding as the library hosts “Hair Itage: The Art of African-American Hair Sculpting” on Saturday, February 25th from 11:00a.m. to 12 noon. Master braider Yvette Smalls will display examples of hair artistry while exploring the rich history of braiding. The Outreach Lecture Program is funded by the Commonwealth of Pennsylvania and sponsored by the University of Pennsylvania Museum of Archaeology and Anthropology.

In this important election year, examine Black Politics past, present, and future with Delaware County Community College professor Dr. Ife Williams on Thursday evening, March 1st from 6:30 – 7:30p.m.
Crozer Library is located at 620 Engle Street in Chester. Please register for programs by calling (610) 494-3454. Find Crozer Library on Facebook and follow us on Twitter!
Posted by Ms. B at 6:23 PM No comments: 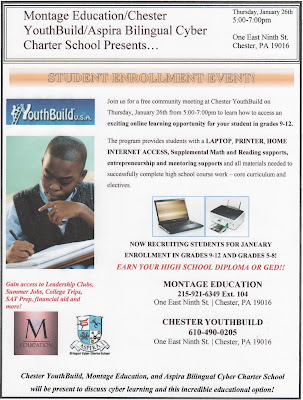 CCCS in Harrisburg with Petition 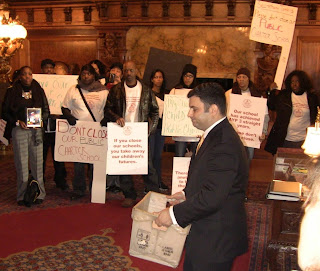 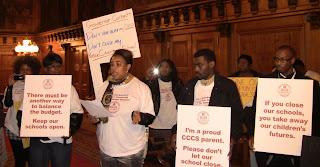 One hundred parents of students at Chester Community Charter School (CCCS), Pennsylvania’s largest charter school, recently demonstrated at the State Capitol Building in Harrisburg, to denounce the State’s seriously delinquent payments to the school. The parents arrived at the Capitol Building, mid-morning, on buses and convened at the Senate Education Hearing. Prior to that, they visited Governor Tom Corbett’s office to deliver 1,160 signed petitions, urging full financial support for their school and all Chester schools.
Posted by Ms. B at 7:34 AM No comments: