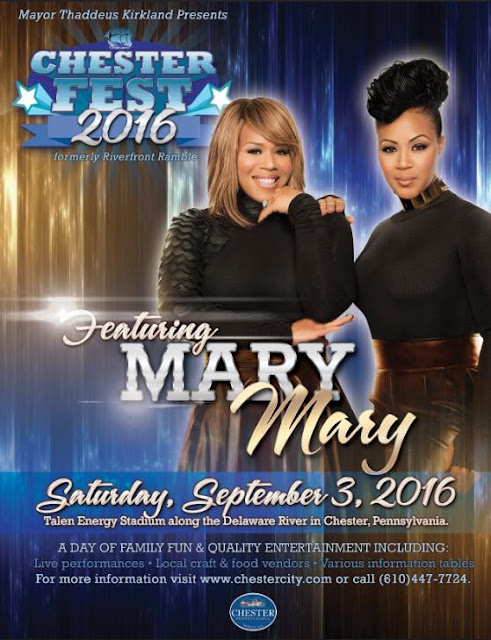 Chesterfest 2016 is scheduled for Saturday, September 3, 2016 on the grounds of PPL Park along the Delaware River in Chester, Pennsylvania. Chesterfest, previously the Riverfront Ramble, attracts over 12,000 visitors from all over the region. Family fun and quality entertainment includes: live performances, children’s activities, an array of local craft and food vendors, various information tables and fireworks display at the end of the event. Entertainment offerings for this year are Gospel Entertainment.
Food & Craft Vendor Spaces Are Still Available!
Download Your Application
Posted by Ms. B at 2:41 PM No comments: 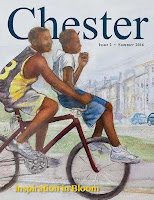 Chester, Pa.—The second issue of Chester magazine is fresh off the press and on its way to locations throughout the city where residents can pick up a copy and read about such topics as the city’s business and arts revival, the storied Chester Clippers high school basketball program and the beauty of the city’s park system.

With a goal to “shed light on Chester’s untold stories,” a group of 16 Widener University students set out in the fall of 2015 to find and report these stories as part of a magazine journalism class taught by Sam Starnes, editor of Widener Magazine. The students were supported by a $1,000 Schmutz Student Engagement Mini grant, which is given annually to support undergraduate student-led projects that focus on Chester.

Kelsey Styles, a senior communication studies and creative writing major from New Castle, Del., served as the managing editor of Chester magazine. She said creating a magazine from scratch was an incredibly challenging but rewarding learning experience.

“One of the most inspiring things I noticed was the amount of pride people from Chester have in their hometown,” Styles said. “They want people to know about Chester. I hope that it’s the voice of the Chester residents—not the voice of the Widener University students—that comes through.”

The issue highlights the arts renaissance in Chester and its role in community development and economic revitalization. The cover of the magazine features part of a watercolor painting by Chester artist Van Buren Payne, who is profiled in the magazine.

In addition to several stories that highlight the arts renaissance in Chester and its role in community development, the magazine includes stories on Clippers basketball, the park system, three Gates Millennium Scholars from Chester High School, the Health Start program for infants, the Senior Community Services Center, TV personality and Chester native Al Alberts, and the many nonprofit organizations working to improve lives in Chester.

“I am extremely pleased with the outcome of this issue of Chester magazine,” said Chester Mayor Thaddeus Kirkland. “Everyone who worked on this publication, especially the students, should be proud of the final product. I see this magazine and the stories that fall within the pages as a stage of positive expression for the city of Chester. There are great things happening here and any opportunity to highlight those things is a progressive step forward in building a better Chester.”

The first issue of Chester magazine was published in fall 2014, and won a gold award from College and University Public Relations and Associated Professionals (CUPRAP). That issue also garnered an award for Khalil Williams, a Chester native, who received the Mayor’s Recognition Award for his contributions as a writer, editor and photographer. Williams, a communications studies major who will graduate this fall, worked as an intern for the Philadelphia Inquirer in fall 2015.

*Picture I took of the Chester High School Basketball team used in the Chester Magazine http://msbeecusd.blogspot.com/2014/12/chester-high-school-basketball-game.html 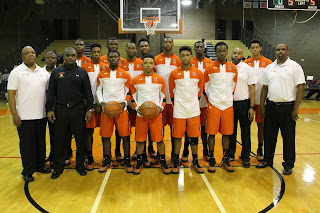 Read the first report and see the video of the event here
Debut of Chester Magazine Written by Widener University Students
Chester Magazine Debut Video
Posted by Ms. B at 9:39 PM No comments:


CHESTER, Pa. — Chester residents and individuals with ties to the city through work, school or a community group are encouraged to showcase their art and/or art activity at the One Day in Chester inaugural arts festival  on Saturday, Aug. 27. Activities will take place within the 500 block of the Avenue of the States between 11 a.m. and 6 p.m.,

One Day in Chester was proposed by Chester Arts Alive and Nia Center Founder Delores Freeman-Clybourn to honor the richness of the arts, culture and people of Chester. The event will highlight the exciting cultural and arts activities currently taking place in the city and build excitement for using art to drive revitalization downtown.

“At this event, we will enact a vision for Chester’s future in which ‘One Day in Chester’ will be every day in Chester,” said Clybourn.

With leadership by the Nia Center, Widener University and the Pennsylvania Council on the Arts, the One Day in Chester arts festival has begun to take shape. It will feature food, art exhibits, workshops, films, performances, live music, artist interactions, children's entertainment and crafts.

Artists and vendors with connections to the city of Chester are encouraged to participate. Complete the artist form or the vendor form on The Nia Center website at www.theniacenterofchester.org. Priority consideration will be given to individuals who complete the application by July 25.

“High participation will lead to new collaborations and new projects that will help Chester’s arts community – and ultimately Chester - thrive. This mirrors the goal of our current Boundaries and Bridges initiative,” said Widener University College of Arts and Sciences Dean Sharon Meagher.

Funded by a 2015 Catalyst Fund from the Barra Foundation, the Boundaries and Bridges initiative is led by a team of Widener University and Chester city leaders to strengthen and support arts collaboration in Chester and realize the planned Culture and Arts Corridor from Widener’s campus to Chester’s City Hall. The concept of this Culture and Arts Corridor first developed through the Chester Made initiative led by the Pennsylvania Humanities Council.

The One Day in Chester arts festival will celebrate these many collaborations that have put art at the center of a downtown revitalization and also provide opportunities for new individuals and groups to join this movement. 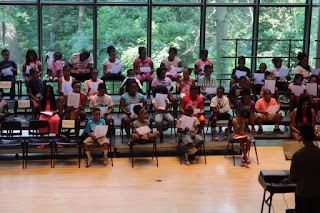 Summer Learning Program Open House
Come join the fun, and groove along with the Chester Children's Chorus Summer Learning Program at Swarthmore College on Tuesday, July 19! Enjoy rehearsal, classes, and athletics with some of our chorus members. The 10:45 a.m.-12:15 p.m. tour meets at Lang Music Building. The 1:15 p.m.-2:45 p.m. tour meets at Ware Pool. Please register for one or both! Registration is limited to the first 20 guests:
http://www.signupgenius.com/go/4090c4faea622a2f94-summer
Posted by Ms. B at 11:43 AM No comments: 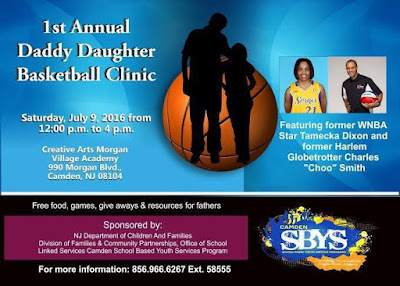 On Saturday, July 9, 2016 from 12:00 p.m. until 4:00 p.m., the NJ Department of Children and Families-Division of Families & Community Partnerships, Office of School Linked Services Camden-School Based Youth Services and the Dare To Be King Project LLC is hosting the 1st Annual Daddy Daughter Basketball Clinic at the Creative Arts Morgan Village Academy, 990 Morgan Blvd., Camden, NJ 08104.