Are you tired of asking yourself: What’s for lunch? Looking for some variety to spice up your taste buds? Students in the School of Hospitality Management at Widener University can help by preparing lunch for you as part of the school’s Fall Lunch Series.
The first serving of the lunch series will be offered Tuesday, October 1.

Served in the J. Willard and Alice S. Marriott Dining Room on Main Campus at Widener University (located on the first floor of Academic Center North on 17th Street between Walnut Street and Melrose Avenue), lunch is available on Tuesdays from 11:30 a.m. to 12:30 p.m.; items include a variety of soups, salads, sandwiches, and entrees at reasonable prices each week.

Can’t make the first serving? The Lunch Series will run through December 3.

The overall university enrollment is also up, bucking a national trend reported earlier this month by the U.S. Census Bureau that showed that college enrollment nationwide plunged last fall after several years of significant growth. The university’s overall enrollment is up one percent from 6,238 in 2012 to 6,311 in 2013.

“We have also introduced new majors such as biomedical engineering and informatics that are in demand,” Harris said. “In addition, we have made a strong commitment to increasing financial aid and invested more than $150 million in infrastructure over the past decade, including a state-of-the-art building for our School of Nursing and a new building for communication studies, computer science and informatics that opened this fall. It’s an exciting time to be at Widener.”

In addition to focusing on increasing financial aid, Widener’s efforts to improve student retention, including new software to track students’ academic progress and identify potential issues, have paid dividends. Seventy-five percent of the university’s freshman from last year returned for their sophomore year this fall, up four percent over 2012. Increased retention typically translates into a higher graduation rate.

The overall enrollment increase came despite a continuing downtown in enrollment in law schools nationwide which has had an impact on the Widener School of Law. Law enrollment at the Delaware and Harrisburg campuses was down 15 percent over last year.

Clippers’ coach, Joseph Providence, has been coaching for 20 years. He said this was his best team. The girls’ tennis team has never won a major award before. “In the City of Chester, tennis is not big at all so it’s a monumental accomplishment for the team to win last year. The team was not expected to win or to be competitive so this was an historical championship.” What accounts for the lost this year? Coach Providence said of his team, “they were a little too confident.” Nonetheless, coach Providence is very proud of his winning girls’ tennis team. 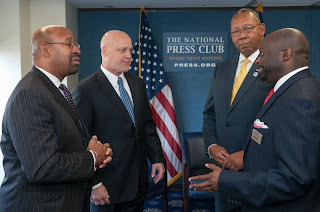