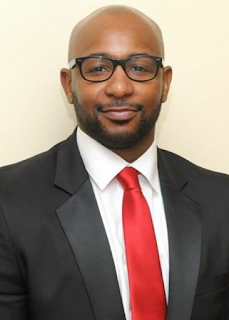 LaDontay Bell, the new Head Football Coach for Chester High School, met with about 50 eager football players in the auditorium after school wanting to sign up for football next season. Most of them know Coach Bell and have played for him since he has been coaching in the district for 6 years, an assistant coach at the high school and coach for middle school football. Bell is currently assigned as Climate Manager at Toby Farms where he has been full-time for 4 years. Bell brings his years of playing football from H. D. Woodson Sr. High in Washington, D. C. Played running back and kick return specialist. He also tried college football but was sidelined due to a shattered knee. Bell earned a Bachelor’s degree in Criminal Justice at Cheyney University and a Masters in Criminal Justice at St. Joseph’s University. Close to 40 returning seniors and juniors wanted to sign back up to play the game. Bell said, “I’m firm in persistence.” He wanted the football players to know if they sign up, they must stick together and communicate. “It’s not all about the coaches, it’s about you guys. I care about you. Want you to be college bound.”

Bell is bringing “top caliber” coaching talent with him. Coaches will be Widener University football player Anthony Davis, Wide Receiver Coach; Dennis Shaw Freshman Head Coach; Bill Bethard Offensive Line; LaFennis Terry Defensive Line and Junior Varsity Head Coach; Wayne Wells, Jr. Linebacker Coach; Al Layton Defensive Back Coach; and James Peach Howard Defensive Coordinator. Bell emphasized that players were getting coaches that knows what they are doing. He was passionate about the team succeeding. “I have a purpose in my life and I want you to have the same purpose. Believe in yourself! I believe you're a championship football team and you just got to believe that before you go on the field or in the weight room or in battle. Only way we win, if we stick together.”

Bell let the guys know that football was going to take them somewhere. He asked them if they had taken the SAT or ACT. He was in disbelief when none of the actual in going seniors took the test. He told them you have to take the test to be prepared because he expects them to get to the next level which is college. He also wants the incoming players to be ready to start tomorrow. “Bring your shirt, shorts and sneaks.” He told them to be ready to work. “I need you to work with me and your coaches.” With football you got to, “Live it, love it, and enjoy it!”

Fresh off spring break, the Chester High School Clippers Baseball team had their first game at home against the Chichester Eagles. Great baseball weather at the A-Field today where Chester had the game opener.

New Head Coach Eugene Campbell is hoping his team improves on their record from last year. The team won 7 games under long time coach Mark Bennett who reportedly had a conflict with his new position and could not coach this year. Campbell has been assistant coach for 6 years before being promoted to Head Coach. The team has experienced seniors who had been playing for 4 years. Campbell believes that experience and talent would translate into more wins for the team this season. Today's score, Chichester 13 to Chester 3. 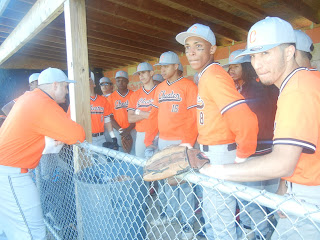 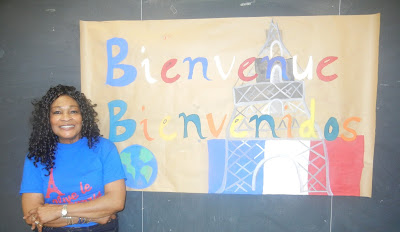 World Language Day was celebrated by the Chester High School’s Language Department today. French teacher, Ivuoma Mbadiwe, organizes the annual event in appreciation of the teaching and learning of world languages. Staff and students bought French or Spanish T-shirts to support the celebration. 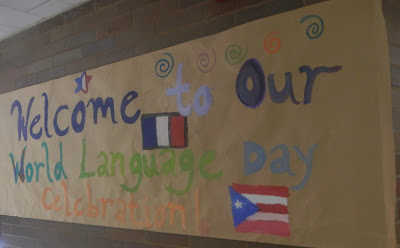