I am pretty sure the bridge was still closed this morning when I went to work. By the end of the day, I saw cars driving over the bridge. If you have been waiting for the bridge to open, no fanfare, it’s open. Looks like the workers did a good job.

Email ThisBlogThis!Share to TwitterShare to FacebookShare to Pinterest
Labels: 9th Street Bridge in Chester is Open 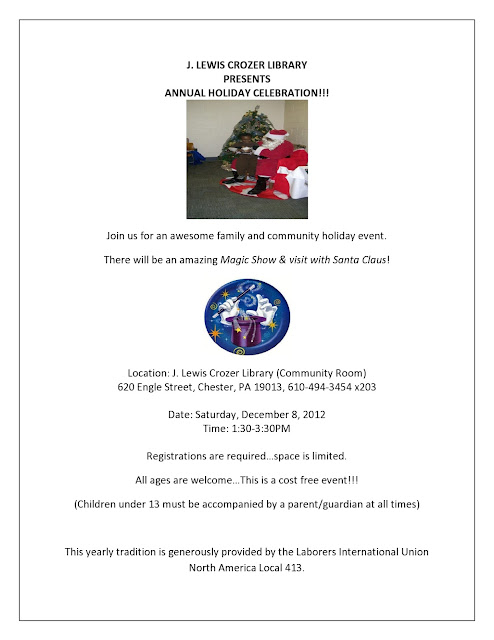 
Rula Al-Saffar, the former president of the Bahrain Nursing Society who was imprisoned for treating injured protesters during Bahrain’s Arab Spring, will speak at Widener University on Thursday, December 6 at 1 p.m. in Founders Hall Room 109. The event is free and open to the public.

Al-Saffar, who graduated from Widener in 2000 with a master’s degree in nursing, was one of several doctors and nurses imprisoned in Bahrain following that nation’s Arab Spring protests in February 2011. Al-Saffar claims she was tortured and threatened with rape during her four months in prison before a hunger strike and the assistance of Human Rights First aided in her release from prison.

In September 2011, she was convicted in a military trial on a slew of charges including incitement to overthrow the Bahraini government. Stripped of her positions and unable to work, her future was uncertain until June 2012 when a civil court overturned her conviction. Many of her colleagues, however, were not so fortunate.

Through it all, Al-Saffar has remained outspoken and unbowed, becoming an internationally known figure for her bravery in the fight for justice for her colleagues. Earlier this year, Arabian Business Magazine ranked Al-Saffar 11th on its list of the world’s 500 most influential Arabs.

Al-Saffar authored an op-ed piece published in the Philadelphia Inquirer in June 2012 about the situation in Bahrain, and she was featured in the fall 2012 issue of Widener Magazine.

A breast cancer survivor, Al-Saffar founded the National Association for Cancer Awareness in Bahrain, and has served as an inspiration to all women suffering from the disease. She also served as assistant professor at the College of Health Science in Manama, Bahrain.


At 7 pm tonight, "Live from the Newsroom" will discuss the trouble in the Chester Upland School District.

Chief Recovery Officer Joe Watkins, who put the Recovery Plan together, will be the guest. I have learned that he is very diplomatic in his manner of speaking. Good Luck getting more information. 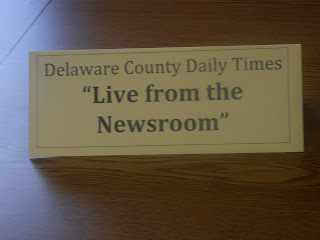 If you are interested in learning more
Click Here
Posted by Ms. B at 6:31 PM No comments:


The Widener University Small Business Development Center will host a FREE seminar on Wednesday, Dec. 5 from 9:30 a.m. – 11:30 a.m. to help businesses gain certification as minority, service disabled veteran or woman-owned. The seminar will also explain the advantages of earning such a certification, which include access to exclusive support services and opportunities for both state and federal contracts. The seminar will examine the qualifications for obtaining government contracts.

This seminar is made possible by funding provided through a cooperative agreement with the Defense Logistics Agency.
Posted by Ms. B at 5:24 PM No comments: 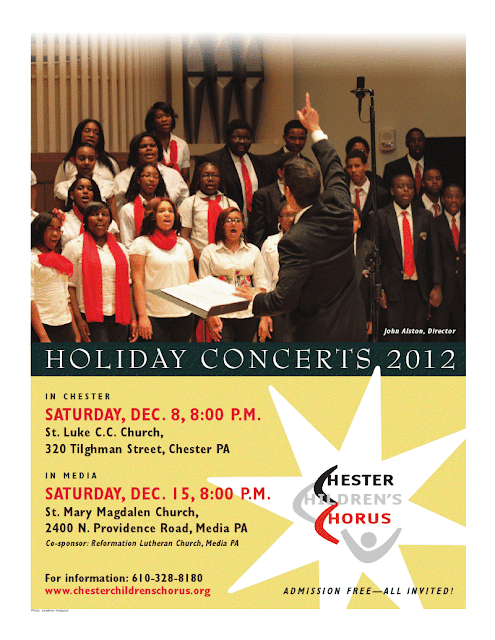 This is also a reminder that Iron Hill Brewery and Restaurant in Media will be hosting a Give 20 event to benefit the chorus tomorrow night, November 28, from 5-10 p.m.  Twenty percent of your food purchases will come back to the chorus as a donation, but you must present a coupon to your server when you are seated.  We cannot distribute coupons at the tables.  If you are interested in attending, please call  610-328-8286 or e-mail at khalker1@swarthmore.edu for coupons.