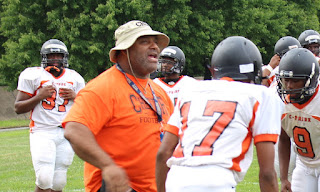 Tony Beaty came out of retirement to coach the Chester High School Football team. Now he is going back into retirement to focus on his business endeavors. I received this information before the snow storm when he announced his intentions to the players. Beaty joined the team in 2014 and exclaimed that “It’s no longer a team, it’s a program.” His three goals were to improve the team by changing the culture, instilling more discipline, and winning Del Val. Beaty had a great rally in his first year as coach but with the best intentions faltered in the second year and left us at the end of this season with, “What happened?” Hey, nobody said it was easy to coach here. While his players respected the position, there was not so much for the coach himself. A little difficult to communicate with and a little intimidating, I reached out to others for my reports. So the bottom line here to, what happened to the team? Too many off the field issues killed them on the field. No need to mention all the issues here but one we are all aware of is the team being affected by gun violence. One of the players was injured before the home coming game. It is difficult to play under those conditions. On one occasion, Beaty said they left practice early because of shooting in the area. I saw that this deeply affected him.

We wish Coach Beaty much happiness in his retirement from coaching.

Chester (13-6) traveled to Whitehall to take on the Zephyrs and came away with a 76-68 victory. With senior Marquis Collins out for the next several weeks due to a shoulder injury suffered in practice, his classmate Khaleeq Campbell took the helm and guided the Clippers with career highs of 28 points and 6 treys. Seniors Stanley Davis and DeShawn Hinson joined him in double figures with 17 and 16 points respectively. Hinson marking a career high with his point production. Despite the cold temperature in the gym, the Zephyrs were hot in the first quarter to the tune of 24 points and their fans could sense an upset in the making. Campbell's eight 1st quarter points kept the Clippers within striking distance. Chester - 12, Whitehall - 24. In the 2nd quarter, the Clippers gathered themselves defensively limiting Whitehall to just 11 points with 3 coming as the quarter ended. Meanwhile Campbell matched the Zephyrs point for point with 11 of his own. After Chester found themselves trailing 15-28, Coach Yarbray called timeout at 4:55 to refocus his players. The Clippers responded with a 9-2 run forcing a Whitehall timeout at 3:13 and a score of 24-30. Chester answered that timeout with another patented Clipper 13-2 run before the shot at the end of the quarter. Hinson contributed 5 points, Maurice Henry added 4 while Davis and Jamar Sudan each dropped in 2 points during the 2nd quarter outburst. Halftime: Chester - 37, Whitehall - 35. In the third quarter, Whitehall resumed their hot streak and recaptured the lead 51-55 going into the final period. The Clippers clamped down and held the Zephyrs without a field goal and put on an offensive show of their own with a 18-5 run before Whitehall knocked down a trey at 1:01 and the score now Chester - 69, Whitehall - 63. The run comprised of 8 points from Hinson including 2 treys, 5 from Davis and Jamal Jones dropped in 5 of his 7 points. After the Whitehall timeout at 1:01, it was a parade to the foul line for the Clippers where they connected on 7 of 9 shots to seal the win. Campbell was 4 for 5, Hinson was 2 for 2 and Davis was 1 for 2.

Chester will return to league play on Tuesday, February 2nd when the Academy Park Knights visit the Clip Joint.
Posted by Ms. B at 7:12 AM No comments:

Chester soundly defeats the Glen Mills Battlin' Bull 78-56 at the Clip Joint to remain atop the Del Val League at 7-0 and improve to 12-6 overall. Four Clippers scored double figures in the contest led by Marquis Collins with 9 of his game high 15 points in the first half. Senior Stanley Davis scored all 11 of his points in the first half. Seniors Donald Hodges and Deshawn Hinson contributed 10 points apiece  with the majority of their points coming in the second half. The Clippers were slow to start as the Bulls jumped out to a 10-3. Coming out of the Clippers first timeout at the 5:11 mark, Chester rebounded with an 8-0 run over the next 1:39 seconds to take the lead for good at 11-10 as the Mills called for a timeout at 3:32. The Clippers finished the quarter with an 11-2 run and a 22-12 lead. In the 2nd quarter, Chester used seven players to match their first quarter production of 22 points while limiting the Bulls to single digits - 8 points - to take a commanding 44-20 lead at the intermission. The Battlin' Bulls were true to their name in the 3rd quarter outscoring the host Clippers 21-18 and reduce the point difference to 19 at the end of the period. Chester - 60, Glen Mills - 41. In the 4th quarter, Hodges put up 8 of his career high 10 points and Hinson finger-rolled 6 of his season high 10 points as the Clippers stretched their lead to plus 20 points to end the contest.

With the recent snow storm causing a cancellation of the Hoop Group Event and the inability to reschedule with Allentown Central Catholic, Chester will now travel to and take on Whitehall on Saturday, January 30 for a 4:30 JV tip-off followed by the Varsity at 6:00.

The Penn Wood game at the Clip Joint that was also cancelled due to the storm is rescheduled for Friday, February 5th.
Posted by Ms. B at 6:13 AM No comments: