The Clippers (18-6) lose a close one at the Clip Joint 50-53 to the visiting Upper Merion Vikings. With the loss Chester will face the Bayard Rustin Knights on Wednesday, March 1st and will be looking to grab one of the last three slots for the State Tournament. The Clippers found themselves trailing 1-11 to start the game before scoring the final 5 points in the quarter to cut the margin to 5 at the end of the quarter. Chester - 6, Upper Merion - 11. The Vikings scored the first 4 points in the 2nd quarter before senior Jah'meir Springfield connected on three consecutive treys to tie the game at 15 at the 4:58 mark. Senior Ahrod Carter would connect on a trey to tie the game at 18 and senior Jordan Camper put-back dunk would give the Clippers their first lead of the game 20-18 with 2:44 on the clock. Carter would drain another trey and the Clippers led 23-20 at the intermission. After leading 32-28 in the 3rd, Chester fell asleep defensively and found themselves trailing 33-35 at the end of the quarter. The Clippers woes continued into the 4th quarter before 6 consecutive points from senior Jamar Sudan gave the Clippers the lead 48-47 with 1:30 left in the contest. After the Vikings knocked down 2 free throws, Chester regained the lead at 1:03 on a Carter bucket. The Clippers rebounded the miss Vikings shot and with only 4 team fouls Upper Merion was forced to foul. With 27.4 seconds on the clock, the Clippers missed the front end of a 1 and 1 and could not secure the rebound. The foul shot by the Clippers was their only foul shot of the quarter and just their 3rd in the second half. Chester's Jamar Sudan was whistled for his 5th foul and the Vikings connected on both to regain the lead 51-50. The Clippers failed to score on their next possession and once again the Vikings found themselves at the charity strip where they score the final two points with 0.8 second remaining. The full court heave by the Clippers fell short. Defensively the Clippers did a much better job in the final quarter limiting the Vikings to just three made baskets but their ability to knock down free throws, 11 of 12 in the quarter, propelled them to the semi-finals at Temple University.

Senior Ahrod Carter led the way with 18 points for the Clippers with 5 treys. He was joined in double figures by Jamar Sudan who finished with 14 points before fouling out. Jah'meir Springfield connected on 9 points and Jordan Camper and Michael Smith finished with 6 and 3 points respectively. Camper included 6 blocked shots and 7 rebounds to his stat sheet while Sudan added 6 rebounds, 3 assists, 1 block and 1 steal to his.

Chester will be looking for their second win over Rustin after starting the New Year with a tight 72-68 win over the Knights at their place back on January 3rd.

Chester (18-5) advances to the District-1 AAAAA Tournament Quarter-Finals with a 74-59 victory over the visiting Upper Moreland Bears. The Clippers will host the Upper Merion Vikings who defeated Strath Haven in the opening round. The Clippers put four players in double figures led by senior forward Jamar Sudan's game high 16 points. Junior Brian Randolph III matched his career high with 12 points and seniors Ahrod Carter and Jordan Camper dropped in 11 and 10 points respectively. Senior Jah'meir Springfield just missed double figures with 8 points. Sophomore Rahmaad DeJarnette, Michael Smith and Jaimhy Evans contributed 6, 5 and 4 points and junior Timothy Johnston completed Chester's scoring with 2 points. Even after a 12 day layoff, the Clippers were on target in the first quarter connecting on five 3-pointers to jump out to a 18-12 advantage. Their hot shooting continued in the 2nd quarter putting up 19 points including three more 3-pointers to hold a 37-30 lead at the intermission. The Clippers were able to keep the Bears at bay by hitting two more 3-pointers in the 3rd quarter as the teams played even at 18 points. Chester - 55, Upper Merion - 48. The Clippers stayed consistent in the final 8 minutes putting up 19 more points but held the Bears to 11 to sail away for the win.

Chester finished with 14 assists on 29 made baskets.

The Clippers will be playing the final game at the Clip Joint on Saturday evening with the 7:00 tip-off against the visiting Upper Merion Vikings. 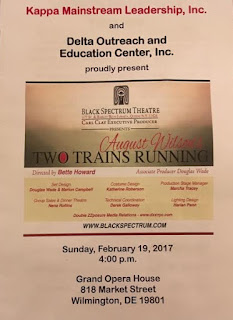 In honor of Black History Month the Kappa Mainstream Leadership, Inc. and Delta Outreach and Education Center, Inc. presented August Wilson’s play Two Trains Running at the Grand Opera House in Wilmington, Delaware on Sunday, February 19, 2017. August Wilson, the famous playwright, also brought us the renowned Fences. Both award winning plays have won accolades. We all know about the brilliance of the production of Fences because the mainstream had a chance to watch it on the big screen recently. Two Trains Running explores “the social and psychological manifestations of changing attitudes toward race from the perspective of urban blacks in the late 60’s” setting in a Pittsburgh restaurant. Thanks to the Kappa and Delta groups for bring this production to the community. Your efforts show how much the black sororities and fraternities are a benefit throughout the nation.
Posted by Ms. B at 3:37 PM No comments: 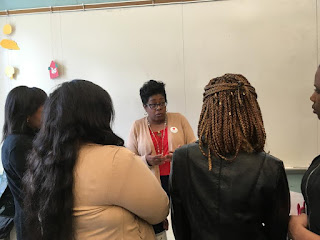 Congratulations to the AKA sorority for sharing their annual HBCU event at the Boys & Girls Club. A lot of students interested in going to college attended the event.
Posted by Ms. B at 5:26 PM No comments:

Chester ended the regular season on a winning note with a 64-47 Del Val League victory over the host Glen Mills Battlin Bulls. With the win the Clippers finish with a 17-5 record overall and 8-2 in the league. The Clippers once again started slow but five first quarter points from senior Jamar Sudan allowed them to hold a slim 13-10 lead. Things got worse for the Clippers in the 2nd quarter as they were held to just 9 points but were unable to stop the aggressive play of the Battlin Bulls which took the lead into intermission. Chester 22, Glen Mills - 26. The Clippers exploded in the 3rd quarter for a 26 point outburst led by senior Ahrod Carter who produced 13 of his game high 17 points including three treys. Sophomore Michael Smith added 4 of his 10 and senior Larry Yarbray Jr knocked down a trey for 3 of his 5. Sophomore Jaimhy Evans and junior Brian Randolph III each contributed a bucket while senior Jordan Camper slammed home 2 points but controlled the lane with 3 of his 6 blocked shots. The end result was a 48-37 Chester lead after three quarters. The Clippers were aggressive driving to the basket in the final 8 minutes resulting in a parade to foul line where they connected on 11 of 15 free throws. Sudan led the way with7 of 8 shooting. Smith was 2 for 2 and Evans went 2 for 4. Senior Jah'meir Springfield connected from long distance for his 3 points and Camper finished with another dunk for this 8th point on the afternoon.

Sudan filled out the stat sheet with 14 points, 9 rebounds, 4 steals, 3 assists and 2 blocked shots. Camper recorded 7 rebounds and 1 steal to go along with his 8 points.

Chester will await the results of the District-1 Committee seeding meeting on Sunday, February 12th. With the PIAA moving to six classes, Chester will participate in the District and State Tournaments in the Class 5-A level and their opponent will be determined based on the Sunday's meeting. The Clippers are projected to be the #1 and will host the opening round on Wednesday, February 22nd.

Chester falls to Academy Park 69-66 on a trey with 3.2 seconds left in the contest. The loss means the Clippers (16-5, 7-2) relinquishes control of its destiny in the league title picture. Chester now need a win on Friday against Glen Mills and a loss by Penn Wood in order to share the title. In the opening quarter the Clippers did not match the Knight's intensity as they were celebrating senior night as found themselves in a 7-18 hole. The Clippers seniors found their footing in the 2nd quarter accounting for 22 of the team's 24 points and close the gap to 2 points at the half. Ahrod Carter led the way with 8 points followed by Jamar Sudan (7), Jah'meir Springfield (5) and Jordan Camper's 2 points. Sophomore Jaimhy Evans dropped in the remaining two points. Chester - 31, Academy Park - 33. The teams exchanged bucket for bucket during the 3rd quarter and with the Clippers trailing 46-49, Sudan completed an old-fashioned three-point play with 1:15 remaining to tie the game at 49. The Knight's responded with a trey and Evans answered with a bucket and the Clippers were one point shy at the end of the quarter. Chester - 51, Academy Park - 52. Six Clippers scored in the 20 point third quarter led by sophomore Michael Smith with 5 and Camper rejected 4 shots in the quarter to keep it close. The final 8 minutes were very intense as there were five lead changes and three ties. Trailing by 3, Carter dropped in a bucket at 1:00 to bring the Clippers with one, 64-65. The Knight's only made 1 of 2 free throws after a Chester turnover and on their next possession Carter was fouled knocking down both free throws to tie the game at 66 with 20 seconds remaining. The Clippers played outstanding defense for 16.8 seconds but slipped with 3.2 on the clock. The Clippers called timeout but were unable to force a tie with a score.

Ahrod Carter led the Clippers with 20 points and Jamar Sudan recorded a double-double with 19 points and a career high 15 rebounds. Michael Smith finished with 7 points and Camper, Evans and Springfield each contributed 6. Brian Randolph III had 2 points on the night.

The Clippers will complete the regular season on the road at Glen Mills on Friday, February 10th. The game was rescheduled due to the snow storm on Thursday. The Varsity tips off at 3:30 pm with the JV to follow.