Widener University was put on alert this evening at 5:15 pm as a student reported that a black male, 16-20 years old, wearing a red/purple jacket grabbed his cell phone on Providence Ave. Suspect was riding a bike. Chester Police and Campus Safety are investigating.
Posted by Ms. B at 6:17 PM No comments:

Bobby Hill: A star is born!


I caught Bobby Hill, the 14 year old from Philadelphia, on the Today Show this morning fresh off his stellar performance to Pope Francis at the concert on the Parkway Saturday night. Bobby does have the “voice of an angel” like Mark Wahlberg said. He is a total natural on TV, no nerves at all as he spoke with Willie Geist, Al Roker and Tamron Hall. Bobby did the weather with Al Roker. He completely dominated that Today Show segment. They asked him to sing but was told his agent would not allow it. We are looking forward to see Bobby perhaps perform on America’s Got Talent or The Voice in the future. Or maybe he won’t need a talent contest at all. If you missed the show this morning, watch below or Click Here 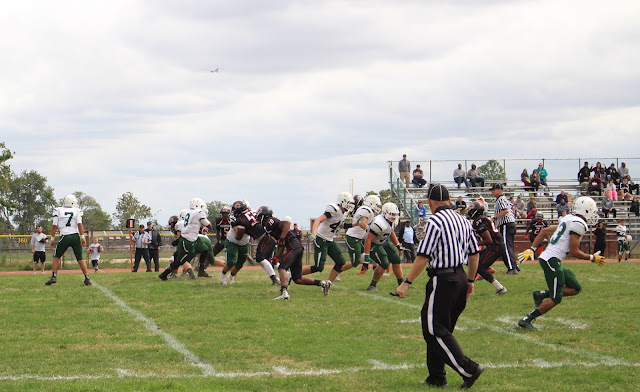 On Saturday, September 26th the Clippers football team lost to Bonner-Prendie 18-14.The Clippers scored first in the first quarter on a Nyhmir Matthews 50 yard run from scrimmage. The extra point failed but the Clips led 6-0. Bonner-Prendie owned the 2nd quarter scoring the next 12 points to take a 12-6 lead at the half. On the opening kickoff of the second half Jaquan “Juke” Flood scored on an electrifying 75 yard run to tie the game at 12. Arlo Lee, Jr. made the 2 points conversion and Chester took a 14-12 lead. But Bonner-Prendie scored again to end the quarter and took a 4 points lead to start the fourth quarter. Both teams’ defenses were very stingy in the quarter but Bonner was a bit more to end the Clippers comeback. Head Coach Tony Beaty said, “We have to stop making the same mistakes week after week.” The Clippers fall to 0-4 while Bonner-Prendie improves to 1-3. Next game for the Clippers will be Saturday at home versus Tuscarora High School out of Frederick, MD. Kickoff is at 1:00 pm. *Due to a mutual decision, the Chester vs. Tuscarora game was canceled. 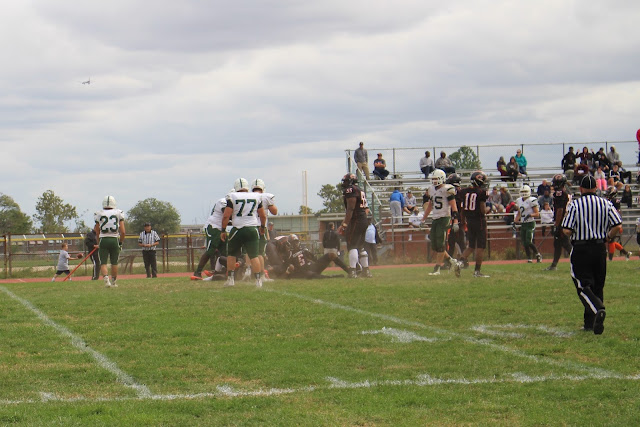 The Papal Visit to Philadelphia

I was in college when Pope John Paul II made his historic visit to Philadelphia. I saw some of his visit on TV but I have been watching more of the events during Pope Francis' visit to the United States. I remember where I was and the time when I heard Pope Francis was selected, hail came down from the sky. I have listened to Pope Francis' words. I believe him to be genuine and authentic. He was invited for the World Meeting of Families but he is also here to remind us of our Christianity and to give a boost to our faith. Checking all the news outlets, I found the best coverage came from Fios 1 news which created a special channel for the event. Fios news simply drowned out the excess noise so that you could listen more intently to the message. Pope Francis delivered profound messages at Independence Hall and at Sunday service. He is all inclusive of races and religion. He mentioned and prayed for others I never thought would come out of this trip. He has a lot to say about mankind what they do about the planet and how they treat each other. After a rigorous schedule and that concert especially on the Parkway, he deserves sainthood. He is very personable and shows compassion towards others. I'm not sure I needed 4 days to come to these conclusions. The school district took off Friday and Monday for the Pope's visit due to, what I was told, the 1 percent of Philadelphians that come to work here. They would have been either shut in or shut out because of all the road closures. Someone at the Chester vs. Bonner game on Saturday said we were on a "Popecation." Those days will be reportedly made up during Easter/Spring break. Another report was that Chester is an emergency route. I can understand if this is the case because normally any accident on the highway at the Kerlin Street exit usually sends a caravan of cars off the highway on to 9th Street via 291 route if you wanted to make it to work on time. This man undoubtedly has clout to shut things down. Common theme that came out of this visit is the Pope asking others to "Pray for me."
Posted by Ms. B at 12:08 PM No comments: 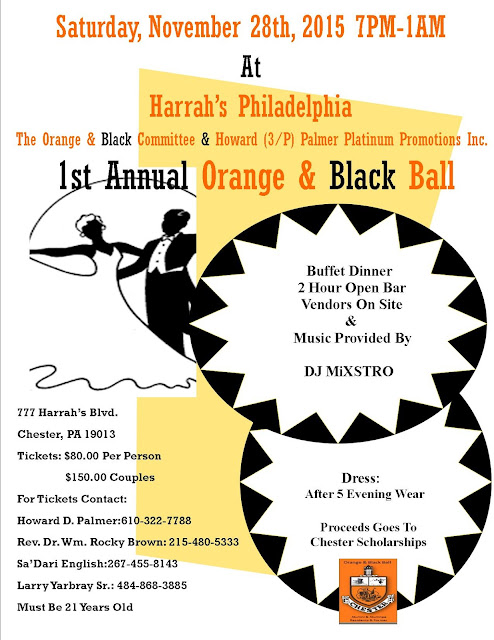 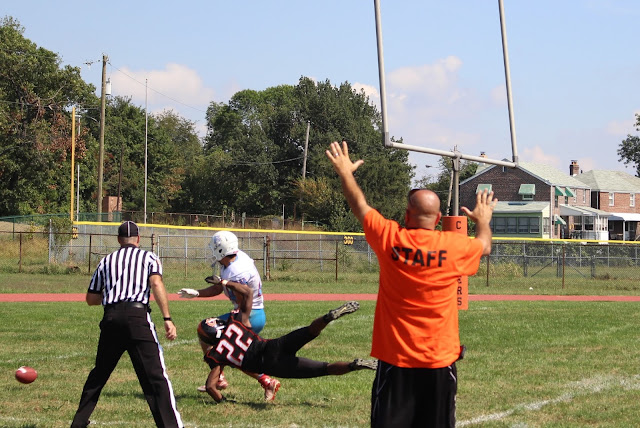 In a game opener at the Athletic Field in Chester, Pennsylvania, the Chester High School Football team lost to Father Judge (Philadelphia, PA), 17-20. This was a non-league game played at home for the Clippers. Father Judge scored first with two touch downs, 0-14. Chester’s first score came in the third quarter from #27 Edward Nelson, Jr. with a 52 yards touchdown bringing the score 6-14. Late into the fourth quarter #25 Rashee Alexander made another touchdown with #22 Jaquan Flood making the 2 points conversion tying the game 14-14. A touchdown for Chester was ruled outside the line sending the game into overtime. Chester scored a 27 yards field goal from #24 Nasheed McCaskill in OT making the score 17-14 but father Judge scored and won 17-20. The next game is at home vs Bonner-Prendie on Saturday.

Welcome to new announcer Dave Burman who told the score when the scoreboard was not working. 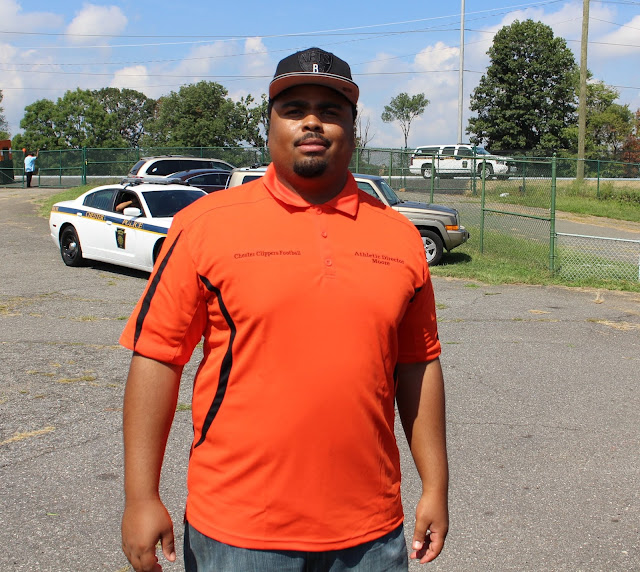 Andre Moore is the new Athletic Director for Chester High School. He took the place of the retired Randy Legette. Moore had been the Middle School Director for 4 years and says, “Everything I know I learned from Legette.” He has a winning record from the middle school basketball team. 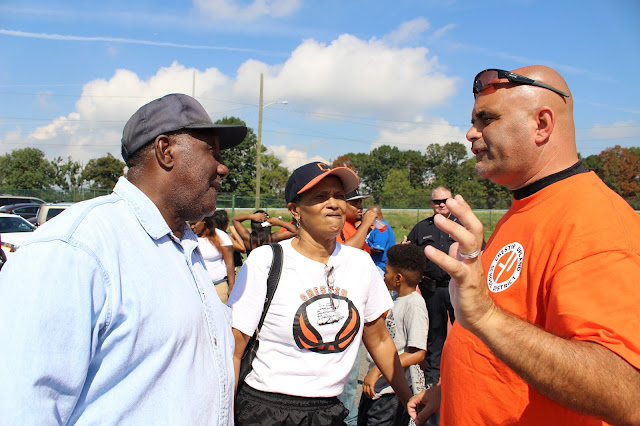 Wendell Butler, running again for Mayor of Chester, deep in conversation about the current school dilemma with his wife and Dennis Martinelli; The issue at hand surrounded garnishing support for the bus trip to Harrisburg on Monday for school funding. 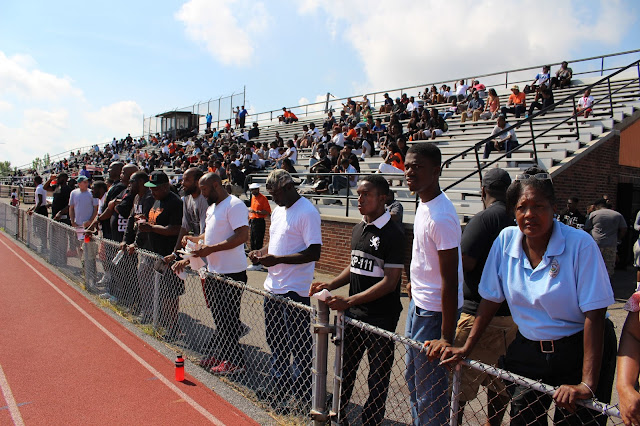 The Chester Crowd, God Bless them!