Chester (19-5) returned to winning form with a convincing 73-59 victory over the visiting Methacton Warriors. The win advances the 6th seeded Clippers to the District-1 Tournament's 5th Place game on Thursday, February 28th on the road at 5th seeded Norristown Eagles.

The Clippers forced an uptempo pace in the first half. Senior Javan Graham returned to the starting line (in the spot vacated by sophomore Karell Watkins) scoring 5 of his 7 points in the opening quarter to match fellow senior Michael Smith's five points. Chester trailed 13-15 at the end of the quarter. The team continued the pace in the second quarter and while the Warriors were knocking down shots from distance; they made four treys out of their five field goals. The Clippers used 8 field goals, four from junior Akeem Taylor Jr, three from junior Rahmee Gilbert and one from senior Rahmaad DeJarnette to even the quarter at 17 points apiece. Gilbert had an old fashioned three-point play in the process. The Clippers trailed 30-32 at the break.

Chester put their defensive pressure on display in the third quarter forcing numerous turnovers and thlimiting the Warriors to just 6 points while lighting up the scoreboard with 21. Michael Smith led the way with 9 points followed by six more from Taylor and baskets from Gilbert, DeJarnette and Graham. The Clippers enjoyed a 51-38 advantage going into the final 8 minutes. The pace of the game wore down the Warriors.

The Clippers continued to run the Warriors while playing clock control. The Warriors were forced to foul and the Clippers made them pay by going a perfect 12 for 12 from line in the fourth quarter. After sophomore Shaquan Horsey connected on an old fashioned three point play Chester held their biggest lead of the night 71-52. The team made an outstanding 17 of 18 free throws for the game.

The 6th seeded Chester Clippers (18-5) missed their shot at a 24th District Title with a 59-67 setback at the hands of the 3rd seeded Lower Merion Aces (23-2). The game was played before a standing room only (signs on the outside doors read "Game Sold Out") and no one left before the final buzzer sounded.

The game was a back and forth affair with the final margin matching the largest lead of the game. The Clippers trailed by one after the first quarter, 18-19, and by two at the half, 37-39. The Aces pushed their lead to five and the Clippers were facing a 46-51 deficit at the end of the third quarter.

Michael Smith scored on Chester's second possession cutting the margin to three, 48-51. On their next possession the Clippers had the opportunity to close within one but junior Rahmee Gilbert went 0 for 2 from the line. After the Aces scored their first bucket of the quarter at the 5:55 mark, Chester's attempt at an old-fashioned three point play fell short when senior Javan Graham failed to connect on the free throw. The Clippers still trailed by three, 50-53, with 5:42 on the clock. The Aces scored on their next two possessions to push their lead to eight, 50-58. Sophomore Karell Watkins would score off an assist from Smith but the Aces would march to the free throw line and knock down two to keep the margin at eight, 52-60.

Senior Rahmaad DeJarnette responded with a trey bring the score to 55-60 with 4:25 remaining. The Clippers held strong defensively holding the Aces scoreless on their next three possession but were unable to cash in; including missing the front end of a 1-and-1. Karell Watkins stole an Aces pass on their ensuing possession and would score off an assist from Smith to cut the lead to 57-60 at 2:45. The duo connected on the next possession after Watkins rebounded the missed Aces shot and the deficit was now one, 59-60 with Chester calling time-out at 2:05.

On the Aces next possession Smith raced from behind the Aces for a steal but gave the ball up in his hast to score at the other end. The Aces connected once again from the free throw line for a 59-62 advantage with 1:07 remaining. The Clippers went scoreless, 0 for 4 from the field, on their final four possessions of the game.

The Clippers will continue in the District-1 Tournament for seeding going forward to the State Tournament. They will host 7th seeded Methacton on Tuesday, February 22nd. Tip-off is scheduled for 7:00 at the Clip Joint.
Posted by Ms. B at 4:40 PM No comments:

Chester (18-4) advances to the District-1 Quarter-Finals and qualifies for the State Tournament with a come from behind 77-73 victory over the visiting Plymouth Whitemarsh Colonials. The win keeps the Clippers 2019 win streak alive at 14 games.

Senior Rahmaad DeJarnette was on target scoring the first 6 points for the Clippers. Unfortunately after picking up his 2nd foul he became a spectator the rest of the first half. He also saw a quick exit in the second half collecting his 4th personal at the 2:59 mark of the 3rd quarter. He did manage an important block on a Colonials three point attempt with his team trailing 46-48 at 3:03 but was called for an offensive foul on his drive to the basket.

The Colonials began knocking down shots from long distance in the 2nd quarter with four treys out of their 8 made baskets. They also went 3 of 3 from the charity stripe to earn a 40-34 advantage at the half. The Clippers were led by Watkins putting in work in the paint with 8 second quarter points. Chester's seldom used 6'6" sophomore Shaquan Horsey came off the bench to give Watkins a blow and made the most of his 1:37 seconds of playing time with a timely blocked shot. Senior Christian Massena came off the bench hitting two free throws to pull the Chester with four, 30-34, at the 2:11 mark. Juniors Rahmee Gilbert and Carroll each scored a deuce but that didn't offset the two treys from the Colonials giving them the half time lead.

The Clippers did a better job protecting the three point line in the 3rd quarter not allowing the Colonials to score from long distance and the teams played even scoring 18 points apiece. Chester trailed 52-58 going into the final 8 minutes of the contest. Watkins led the way with 7 points followed by Smith (4), junior Akeem Taylor Jr (3) and Carroll and senior Javan Graham with 2 apiece.

The Clippers maintained their stance at the three point line in the fourth quarter and their scrappy play enabled them to tie the game at 64 with 4:31 on the clock. Michael Smith knotted the game with two free throws coming off a technical foul on the Colonials 7'4" big man. The Clippers took with lead for good, 66-64, after Watkins stole the Colonials inbound pass, his third consecutive, and scored at 4:30. The Clippers starting five produced all 25 fourth quarter points and Gilbert knocked down 1 of 2 free throws with 8.7 seconds remaining to give the Clippers the 4 point cushion. The Colonials did hit a three point shot with 18.7 seconds remaining to pull with 3, 76-73.

In the final quarter Watkins produced 7 of his team high 24 points, Taylor added 6 of his 9 and Gilbert contributed 5 of his 7. Smith added 4 of his 18 to join Watkins in double figures and Carroll put up 3 of his 9.

Smith finished the contest with another five assists. Taylor and Carroll each collected 7 rebounds while Watkins string of consecutive double doubles was halted at 12 as he was restricted to 5 rebounds. He did manage however to collect those three steals and dish out an assist.

Chester will travel to Lower Merion to take on the Aces on Friday, 2/22/2019, with a trip to the Semi-Finals and Temple University on the line.
Posted by Ms. B at 4:09 PM No comments: 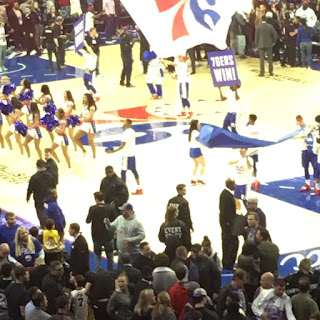 The fans came out for Senior Night and the Clippers did not disappoint. Playing in front of an announced crowd of over 1600, the Clippers overcame a 6 point halftime deficit to claim a 66-59 victory over the visiting Academy Park Knights. With the win Chester completed their second consecutive perfect (10-0) run through the Del Val and pushed their overall record to 17-4. The Del Val Champions have now won 13 consecutive games in 2019 matching their win streak from the 2017-2018 season.

The first quarter was a back and forth affair that concluded with sophomore Karell Watkins put back on a missed Javan Graham shot and Chester ahead 14-13. Chester's defense did not hold up well in the second quarter allowing the Knights open looks from distance accounting for the 18 points outburst. Chester trailed 25-31 at the half.

Chester began the 3rd quarter with a 6-0 run to tie the game at 31. The Clippers fell behind before a steal and a layup by junior Rahmee Gilbert tied the game at 35 with 2:53 remaining. Chester outscored their opponents 9-3 to closed the quarter capped by a Rahmaad DeJarnette wind-mill dunk as the quarter ended. Chester now led 44-38.

Watkins entertained the crowd with two dunks off assists from Gilbert and senior Michael Smith to open the final quarter. And, he followed that with rebounding the missed Knight and going the distance for yet another bucket giving the Clippers a 50-39 lead. Senior Michael Smith got in the act with 8 of his 15 points put on a dribbling display as the Clippers milked the clock. Watkins dropped in 6 of his team high 16 points and junior Akeem Taylor Jr chimed in with 5 of his 12 to join his teammates in double figures. Yes, as has become his custom Watkins had another double double by hauling in 14 rebounds. Junior Zahmir Carroll added a bucket and seniors Javan Graham and Naim Berry Jr. completed the scoring with 2 and 1 points respectively.

With the regular season completed, Chester will await the results from the District-1 Tournament's Seeding Meeting on Sunday, February 10 to find out who they will face in the upcoming tournament. The Clippers are expected to be seeded in the top 8 earning them a first round bye. They will begin play on Tuesday, February 19th at the Clip Joint.
Posted by Ms. B at 6:54 PM No comments: