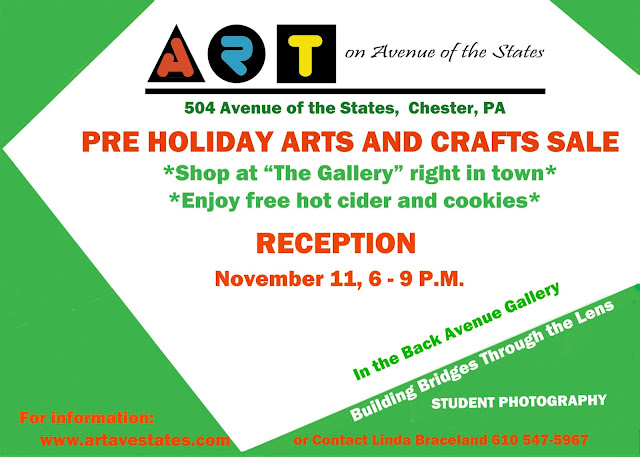 504 Avenue of the States, Chester, PA

The Back Avenue Gallery Proudly Presents

Chester High School and Widener Students from the

Building Bridges Through The Lens Project
Posted by Ms. B at 10:11 AM No comments:


Chester, Pa. (November 7, 2016) -- Aspiring engineers are encouraged to get a glimpse into their futures at Widener University’s Engineering Mini-Camp. In just one day, participants will design a bridge, launch a rocket, explore computer modeling and better the environment through hands-on laboratories simulating life as a Widener engineering student. Open to all high school students, the Engineering Mini-Camp will run from 9 a.m. to 2 p.m. on Friday, November 11 at Widener's Kirkbride Hall.

Over 100 participants will have opportunities to interact with School of Engineering faculty and students in addition to engineering professionals. Topics of discussion will range from the different specialties within the engineering field to career options and salary expectations.

An optional parent program will run simultaneously to address the topics of admissions and financial aid.
Posted by Ms. B at 5:57 PM No comments: 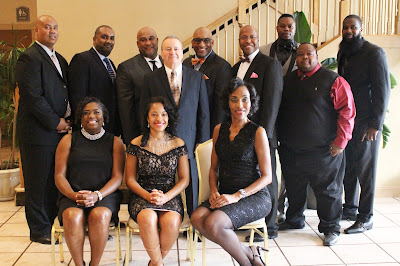 Concordville, PA – Sunday, November 06, 2016, the Chester High School Athletic Hall of Fame held a special ceremony for their 25th anniversary. The Athletic Hall of Fame was the brain child of Dr. Dexter Davis former Superintendent of Chester Upland School District, Jay Francis, and Albert Francis who were original committee members along with Fred Pickett, Lawson Showell, Angelo Tiburzi, and Keddy Harris. The first ceremony was held in 1992 at the old Eyre YMCA in Chester, PA. The ceremony has been held at the Concordville Inn since 1997. There have been 345 athletes inducted in the hall of fame.

This year’s inductees are:

Stacie Hall-Hardy, Softball 1987-1991 played 4 years, 2 for JV and 2 for varsity, and named All Delco Honorable Mention.

Eugene Pinder, Football 1984-1988 played 3 years Varsity, Outstanding Defense Player as a member of the 1986 Del Val Championship Team, and named to the Hero Bowl All Star Game in 1988.

Special recognition in memory of Robert Crawford who recently passed, “You will be missed but not forgotten. You were one of the crew members who guided the Clipper ship, Sail on Sail.”

Must Fight Boxer Quadir Albright represents U. S. A

In a bout at the Clarion Hotel in Essington on Friday night, boxer Quadir Albright, age 17 and 141kg, representing the USA fought against Teo Allen, age 20 and 141kg, representing Ireland. This was an event put on by the Must Fight Boxing Club. There were 22 boxing matches for the night ranging from pee wee to heavyweight boxers including men and women.

Albright a welterweight boxer started boxing in 2012 at the West Philadelphia Cobbs Creek Recreation Center then later joined Must Fight Boxing Club in 2015 where he has been in training with Dan Mullarkey. Albright is in the 11 grade at Chester High School. After high school he is planning to continue the boxing profession. He plans to continue training for the 2020 Olympics. Albright said, “I feel as though it’s a great opportunity to travel the world and have fun while doing so.”

Albright put on a good fight in the 3 rounds boxing match in a very close call for the win for his opponent. Although Albright was disappointed with the loss, he will continue to fight another day. See the You Tube video HERE
Posted by Ms. B at 12:12 PM No comments: