Screwball Comedy "His Girl Friday" at the Hedgerow Theatre 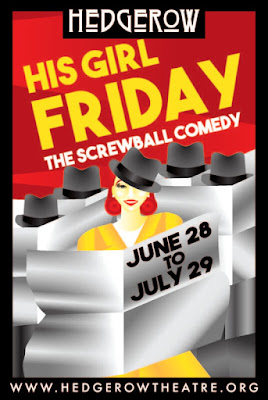 Walter Burns, hard-boiled editor for The Morning Post, learns his ex-wife and former star reporter, Hildegard “Hildy” Johnson, is about to marry bland insurance man Bruce Baldwin and settle down to a quiet life as a wife and mother in Albany, New York. Walter is determined to sabotage these plans, enticing the reluctant Hildy to cover one last story, the upcoming execution of convicted murderer Earl Williams.

Director Damon Bonetti speaks of the piece, “Bringing one of the great movies to the stage and finding ways to make actors take on many different roles - sometimes in the same scene.” And those actors will feature our core company members: Jared Reed, Jennifer Summerfield, Adam Altman, and Jessica DalCanton, along with ensemble players Owen Corey and Mark Swift.

To give tone to the piece, Bonetti comments, “It's a classic screwball comedy, a war of the sexes, with a bit of relevance thrown in with crooked elected figures and sensationalism of the press.”

The Core Company Project brings together a core group of four actors over three years to perform in nine plays together ranging from classic to contemporary to new works created for the Core. Adam Altman, Jessica DalCanton, Jennifer Summerfield, and Producing Artistic Director Jared Reed will be the core actors in this first iteration.

“The best part--watching these wonderful actors inhabit different roles, the seamlessness of transforming from character to character and the breakneck speed of a classic summertime Hedgerow comedy!” Bonetti encourages.

The first performance of His Girl Friday is Thursday, June 28, at 7:30 p.m. and runs until Sunday July 29, at 2 p.m. There will be an additional matinee performance on Wednesday, July 18 at 2 p.m.

One Love Activity – Tuesday, June 26th 11-12pm: After sharing the book One Love by Cedella Marley, children will receive pre-cut paper hearts, and we will invite them to write or draw things and people they love on the hearts. These hearts will be sent home at the end of the program, or will be used to decorate a bulletin board or a wall in our library!

Peter’s Plate Activity – Tuesday, July 3 11-12pm: Children will make a double-sided paper plate to use as a prop as they listen to the audio recording of Peter and the Wolf that accompanies the book by Janet Schulman.

Create Your Own Cardboard Guitar! – Tuesday, July 10th 11-12pm: The activity will begin with a read aloud about guitars or music around the world. While children are decorating their own guitars, they will listen to music in background featuring guitars!

Limbo Activity! – Tuesday, July 17th 11-12pm: Two people hold the limbo stick while each participant takes a turn attempting to go under it. After each player attempts, lower the limbo stick little by little. If a player touches the limbo stick with any part of his or her body, he or she is out of the game. Continue lowering the stick until only one player remains – winner gets a prize!

Craft Drums! – Tuesday, July 24th 11-12pm: The activity will start with a read aloud about drums in different countries; then children will be able to create their own drum! Children can transform empty canisters into drums by decorating the sides with construction paper, crayons, markers, or paint. Then, they will be ready to play!