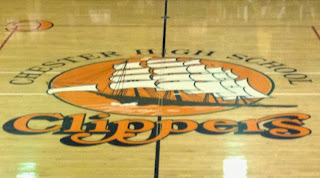 
The Chester Clippers (4-0) handed the Sanford Warriors (1-1) of Delaware their first loss of the season 69-64 in the opening contest of the Coaches vs. Cancer event held at Cheltenham High School. Today’s format was Pennsylvania vs. Delaware. The game tipped-off at noon and the Clippers started the affair with an exciting come from behind 69-64 victory. The last time these teams met was back in December 2010 when Sanford put the only blemish on the Clippers (31-1) State Championship season. Today’s victory enabled Coach Yarbray to even his record against the Warriors at 1-1 and give him a 4-1 overall record against the state of Delaware.

In the first quarter, the Clippers did not show any effects of their late night in Reading having returned to Chester around 11:30 pm on Friday night. Senior Mahir Johnson and sophomore Marquis Collins led the way scoring 6 points apiece as the Clippers jumped out to a 19-14 lead after one period. Chester utilized six players to produce their points while Sanford used only three. The results of the late night appeared to show in the second quarter as the Warriors raced passed the Clippers to the tune of 14-9 to tie the score at the intermission. Chester – 28, Sanford – 28. Sanford held the advantage in this period with five players producing their points and Chester could only manage to put four in the scoring column. The starting fives for both teams produced all their points in the 3rd with the Warriors gaining the advantage once again this time to the tune of 22-16 and Chester found itself trailing for the first time this season going into the final quarter. Chester – 44, Sanford – 50.

Having played 11 of their 12 players throughout the first three quarters, the Clippers hit another gear starting the fourth quarter with an 11-0 run to regain the lead at 55-50. The Warriors called for a 30 second timeout after scoring their first bucket in the period at the 4:40 mark. Chester – 55, Sanford – 52. The Clippers responded with an 8-4 burst and Sanford called for a full timeout now trailing 63-56 at 2:25. The senior inside-outside combination of Johnson and 6’8” forward Tyrell Sturdivant was too much for the Warriors as they accounted for 17 of the teams 25 fourth quarter points including hitting on 7 of 9 free throws. Sanford would call their fifth and final timeout of the afternoon with 46.2 second remaining and trailing 69-62.

While Sanford’s starting five produced all their points led by Todd Hughes (24) and Anthony Mosley (19), Chester’s bench accounted for 19 of their 69 points and that was one of the differences in the contest. Chester size was another as they out-rebounded their opponents 29-17.

Mahir Johnson led the Clippers with 20 points. Joining him in double digits was Marquis Collins with 11 points and Sturdivant with yet another double-double of 16 points and 12 rebounds. Jahmi Bailey (7), Keyonte Watkins (6), Gabe Adesina (3) and Brewster Ward’s two points completed the Clipper’s scoring.

Chester’s next contest will be their first home game of the season on Saturday, December 21st in the inaugural Fred Pickett Classic. The team will play in the second game of the Classic against Philadelphia’s Math-Civic-Science Charter with a scheduled 3:15 tip-off. Philadelphia’s George Washington will face Harrisburg at 1:30.
Posted by Ms. B at 7:46 PM