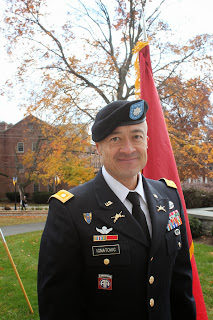 Ignatovig comes to Widener after serving a one-year assignment to the Sinai Peninsula of Egypt in the Multinational Force and Observers peacekeeping mission, established when Egypt and Israel signed a peace treaty in 1979. The Multinational Force and Observers monitor Sinai to ensure that both sides adhere to specifications agreed upon in the treaty.

Prior to his assignment in Egypt, Ignatovig held a position similar to his new appointment at Widener as a professor of military science and commander of the Moccasin Battalion at Florida Southern College in Lakeland, Fla.

“Working with students in a direct mentorship role is extremely rewarding for me,” said Ignatovig. “I am excited to return to a university environment, where I can teach leadership skills to young cadets and see them progress from being taught to teaching and leading others through the ROTC program.”

Ignatovig comes from a military family and joined the infantry at age 17. He was accepted into the early commissioning program at age 18 and attended Valley Forge Military College. He was commissioned at age 20 in May 1991. He is an Armor Cavalry Officer.

Ignatovig attended The Richard Stockton College of New Jersey to earn a bachelor’s degree in management. He later earned a master’s degree in international affairs at the Naval War College.

Since his commissioning in 1991, Ignatovig has had a long, distinguished military career. Highlights include deployments to Afghanistan, Pakistan, Egypt, Europe and the Middle East in addition to various international assignments. Among his many military awards is a Bronze Star Medal.

Since beginning his most recent assignment at Widener, Ignatovig and his wife, Denice, and four children, Sarah, Hunter, Luke and Erin, have relocated from Florida to West Chester, Pa.