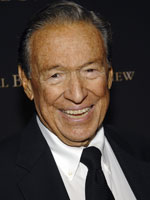 Mike Wallace, one of the original 60 minutes newscasters, has passed on. The other 60 Minutes newscasters who have passed on before him were Harry Reasoner, Ed Bradley, and Andy Rooney. 60 Minutes was the first news magazine show I watched. More magazine shows have come on the scene since the debut of 60 Minutes. I tuned in faithfully to watch the show on Sundays when these guys were on. Once they retired, I moved on. But 60 Minutes which debuted in 1968 is still going strong.
To see clips of The Very First “60 minutes” Click Here
More on the life of Mike Wallace Click Here
Posted by Ms. B at 10:59 AM