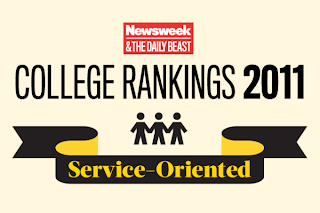 Widener Press Release
Chester, Pa.—Newsweek/The Daily Beast has again named Widener University among the top service-oriented colleges and universities in the nation. Widener and Bryn Mawr College were the only two institutions in Pennsylvania on the list.
Newsweek/The Daily Beast again partnered with Washington Monthly for the ranking. Earlier this week, Washington Monthly released its annual rankings of the colleges and universities that do the most for the
nation. Widener ranked ninth among national universities in the service category and 55th overall. The Newsweek/The Daily Beast rankings, however, combine public institutions and private liberal arts schools for its service category, placing Widener 19th in the nation.
Widener President James T. Harris III said he is pleased that more national publications are recognizing the contributions that colleges and universities make to their communities and to the nation.
“Widener focuses on how we can prepare students to serve our communities and develop the character, courage and competencies to be effective leaders in our nation,” Harris said. “We believe that is the true measure of the success of an institution.”
Using Washington Monthly’s criteria, Newsweek/The Daily Beast ranked schools based on the number of alumni who serve in the Peace Corps, the percentage of students in ROTC, the percentage of federal work-study money that goes to community service, the number of students participating in community service and the number of service hours performed, and the school’s rank on a combined measure of the number of staff supporting community service, the number of academic courses that incorporate service, and whether the institution provides scholarships for community service.
Widener University has ranked among the top 100 institutions in the annual Washington Monthly rankings since the magazine’s inaugural college issue in 2005. In addition, Widener was among the first universities in the nation to be categorized as a “community engagement” institution by the Carnegie Foundation for the Advancement of Teaching in 2006. Widener has also consistently been named to the annual President’s Higher Education Community Service Honor Roll.
For the full ranking and methodology used in the Newsweek rankings, Visit Here